DuckDuckGo vs Google - Which is the Best Search Engine?

DuckDuckGo vs Google: Which One Should You Pick? 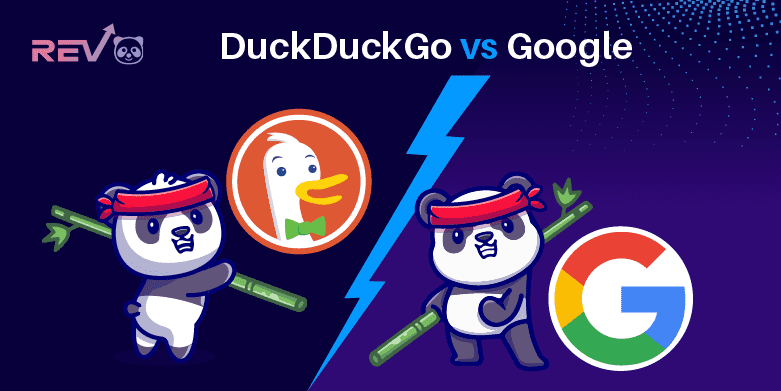 Unless you’ve been living under a rock for the past couple of decades, you’ve heard of Google. The search engine giant has the world depending on its range of services.

If you’re an Android user, your digital footprint is constantly being monitored; from the steps, you take to the searches you make and the products you browse, the search engine giant is aware of your every movement. This is evident in Google’s biased search suggestions, which bombards viewers with information that Google thinks aligns with their search queries.

This is where DuckDuckGo promises to be a formidable alternative. If you’re one of those people who think privacy is a critical element while deciding which search engine to use, DuckDuckGo is the best fit. But discretion is hardly the search engine’s sole USP. DuckDuckGo has plenty more to offer and, in this post, as Revpanda, we’ll compare the two rivals to determine which is the better fit for you.

Founded in 2008 by Gabriel Weinberg, DuckDuckGo emphasises protecting the search user’s data privacy. Since the search engine does not store browsing data, it doesn’t follow people around with personalised ads and suggestions. The search engine neither tracks IP addresses nor puts your details up for sale. But apart from anonymity, what else does DuckDuckGo bring to the table?

For starters, the search engine follows a similar layout as Google. But while Google offers hybrid results for various search types, DuckDuckGo displays up to ten traditional results. The interface is uncluttered and displays up to two ads on every results page.

DuckDuckGo uses independent web crawlers and resources to compile search results. Some of the most notable resources are Yahoo, Yandex, Bing, and Wikipedia. The search engine also pulls up contact details like name, email address and phone number from user-review sites like Yelp. Apple Maps is the default location service provider, although the search engine users can toggle between Google Maps, OpenStreetMap, and HERE Maps.

DuckDuckGo also offers a range of usability features like an endless scroll. When a user reaches the end of the search page, the next page automatically loads to create an endless loop. While this might sound like a simple feature, it helps keep the interface clean, which improves load speed. Users can also disable this feature at will.

The OG search engine, the Alphabet-owned company, is the digital kingpin for several reasons. It has the largest databases, the most potent tools, and the deepest pockets in the business, for starters. Google Maps is a powerful asset that contains several vital information for businesses across the internet. From name to email address, phone number, photos, reviews, and more, the search engine giant offers every necessary information that one might need while searching for service providers.

Like DuckDuckGo, Google offers a range of searches to help with search results, but with greater options. Some of these are:

According to Google, its search results contains hundreds of billions of web pages that are over 100,000,000 GB in size. This is by far the largest on the internet, which makes Google the most dominant search engine on the internet. This isn’t its sole USP. Google is the smartest of the bunch and constantly updates its algorithms and ranking signals. Its superior machine-learning mechanism is the second reason Google tops the charts.

It has the best ranking system, the most effective web crawlers, and the best algorithms, which birthed the mantra, “if it’s not on Google, it’s probably fake”. Although playful, the statement explains Google’s capabilities to identify a search term and provide the most relevant answers from unique long-tail keywords.

That’s not all. Other popular entities contributing to Google’s powerhouse position include Gmail, YouTube, AdSense, Google Play, and Google Analytics, among others. The vast network of Alphabet-owned tools and resources, Google’s unmatched ability to understand real-world entities, and its unmatched leadership in the world of search engines keep Google ahead of the competition.

However, none of that compensates for the fact that Google extracts, stores, and uses personal data for profit. As a growing number of companies adapt their business strategies around leveraging user information, Google continues to find new ways to attract new users. However, this doesn’t change the fact that Google is the best search engine on the internet.

The Benefits of Using Google

The Drawbacks of Using Google

10 Reasons to Choose DuckDuckGo Over Google

While Google offers a bunch of incredibly useful features, the search engine has a fair share of shortcomings. These limitations often force people to look elsewhere. DuckDuckGo vs Google is a heated debate since the former offers similar results without privacy concerns. Here are 10 reasons why you should use DuckDuckGo instead of Google.

Google tracks confidential details without your permission. Your social media profiles like Facebook, Instagram, and Twitter are prone to data breaches when accessed from the browser. However, on Google, privacy is a joke, and your data is stored, shared, and accessed for personalised advertising.

When using the browser, Incognito Mode isn’t of much help either. All it does is delete the local search history after every browsing session. The name is extremely misleading and does nothing to prevent any website that you visit from tracking your IP address. DuckDuckGo, on the other hand, doesn’t track your digital footprints.

Google tracks your movements even outside the search engine. When using Google’s services like YouTube, Maps, or Gmail, we recommend using DuckDuckGo to block the web crawlers. Web trackers are lurking behind 75% of the top websites on the internet. Any random site that you visit has a Google tracker hidden beneath the surface. DuckDuckGo blocks all such trackers.

Websites using Google Analytics has the company tracking you behind the scenes. The same principles apply to AdSense, DoubleClick, and Admob. These trackers follow the user everywhere and let advertisers design their next campaigns around the browsing history.

While you expect to get unbiased results when making an online query, Google returns tailored results according to your preferences and search history. This may seem useful at first, but a majority of users say they don’t care about personalisation as much as localisation.

Local results can be delivered without tracking, and DuckDuckGo is a prime example. Apart from localisation, personalising results is a harmful practice since Google segregates content that doesn’t align with your interests. This is why it’s called a Filter Bubble.

DuckDuckGo Doesn’t Have an Ecosystem

While Google started as a search tool, it grew into a conglomerate by acquiring companies and tools over time. As the company launched more innovative services, it began favouring the in-house products over the competition. Thus, drawing users into the ecosystem. This behaviour isn’t exclusive to Chrome, as Android has several non-removable widgets.

This is true for other Google services, too, as the company forces carriers to bundle its products and advertise them to consumers. DuckDuckGo has no ecosystem to trap the users. Apart from DuckDuckGo search, there is the browser, and that’s it!

If you run into trouble on Google, it’s extremely difficult to get hold of live support. DuckDuckGo, on the other hand, answers your queries and addresses every glitch. You can also reach out to the team on various social media channels or via email.

If you’d like to directly browse a website while skipping DuckDuckGo, the bangs feature is a major boon. For instance, if you’re searching for Mission Impossible on IMDB, you can use “!IMDb Mission Impossible” to navigate straight to the desired website.

The ! shortcut tells DuckDuckGo that you want to use bangs. You can use the full name or an abbreviation for multiple websites. A few examples include !a for Amazon, !q for Quora, !r for Reddit, etc.

A major part of Google’s search results page consists of paid content. It’s even worse for mobile searchers. At DuckDuckGo, a seamless user interface and experience are priorities. Hence, ads are kept at a minimum. Even then, the content is generic and not based on your search history.

People often change their browsing patterns under surveillance. And while a majority of searchers aren’t aware of Google tracking their virtual footprints, the few people aware of ground realities often get the chills.

Your search query is your business. A web crawler shouldn’t deter you from freely browsing the internet. This is where DuckDuckGo trumps Google. The platform offers anonymous browsing and complete peace of mind so you can shed the fear of being monitored at all times.

Taking on the Giant

At the end of the day, Google is a tech giant with no real competition. With a market cap of over USD 750 billion, 75,000+ employees worldwide, a dominating browsing, search, and online advertising platform, Google is the digital octopus with its tentacles in every element on the internet.

In comparison, DuckDuckGo is microscopic, both in terms of resources and users. Despite the major disparity, the latter is a worthy competitor that’s quickly surpassing other tech conglomerates like Bing and Yahoo. And things have just begun getting interesting!

While Google is undoubtedly the bigger fish in the pond, DuckDuckGo holds its own in certain regards. Privacy, for instance, is a major factor working in DDG’s favour since Google’s privacy policies are prying and disruptive. With that being said, Google follows a stringent data sharing policy that protects user data against unauthorised access. At the end of the day, pick a browser that you’re comfortable using as DuckDuckGo vs Google is a never-ending debate.