What Does it Feel Like to be a Millennial in 2022? 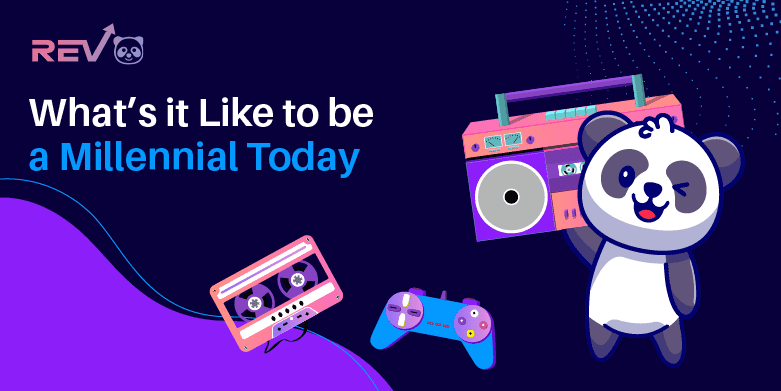 Although naysayers have a lot to say about the Millenial lifestyle and choices, in reality, youngsters today are the most diverse, educated, tolerant, idealistic generation so far.

Since the turn of the Millenium, when the generation took the first step towards adulthood, they’ve been at the centre of media attention for their often whacky sense of fashion and naive arrogance. Think backward baseball caps, bold tattoos, online dating habits, participation trophies, and selfies! However, that’s not their only definition.

Millennials are either debt-ridden, unmarried, unchurched, apolitical individuals or a group of responsible individuals who’re team players, respect previous generations, love their families, and want to save the planet. Each of these Jekyll-Hyde contradictions has been around for ages, and so have the millennials, the oldest of whom are nearly 35 today.

So, where do Millennials find themselves among the different warring factions of the community today? We must delve a bit deeper to find the answer. The baby boomers vs Millennial battle has been rife for ages, and Gen Z is now old enough to have an opinion. Then there’s Karen from Gen X, the polar opposite of woke.

Despite the general notions about the inefficiencies of Millennials, the complex yet dynamic generation is introducing positive change in the world. The Pew Research Center looks at hard facts underneath the headlines to uncover the truth. Here’s what the results show.

When you consider the political scenario, the Millennial has liberal views compared to older generations. They’re diverse, dynamic, and diligent in their research, and that defines their outlook and identity. On social, cultural, and economic issues, Millennials tilt left out of empathy as they don’t consider pluralism as a challenge but an idea to be celebrated and embraced.

Millennials have lower household incomes, are drowning in student loans, and endure a higher rate of poverty than their parents back in the day. According to a study by the American Federal Reserve Board, the wealth of a typical household run by someone over the age of 65 grew by 75% (adjusted to inflation) in 2013 compared to 1980. The figures dropped by 31% for a household run by someone around the age of 35 during the same period.

Millennials experienced several financial disasters during the prime time of their careers thanks to decades of globalisation efforts. Therefore, more Millenial-aged individuals today reside with their parents as opposed to living alone, with a spouse, or with a romantic partner. The number of married couples from the Millennial generation is almost half that of previous generations within the same age bracket.

Gender rules are quickly changing both at home and in the workplace, and millennials are leading this change. Most young adults today promote gender equality despite the raging norms. For instance, while previous generations believe it’s better for children if their mothers stay home, a tiny percentage say the same about fathers. Considering the hypocritical approach, it’s hardly surprising that millennial women find it difficult to strike a balance between their professional and personal life.

A millennial’s life revolves around them. Thanks to social media, they’re the first generation in history that can narrate their life story in words and pictures. Why do you think they take selfies? Is it because they’re self-obsessed? While that’s partially true, the primary reason is that they can. Think of millennials as a modern pre-Copernican generation, and the smartphone is their gateway to infinity. But it’s yet to be seen if the digital revolution improves the generation’s financial circumstances.

Despite the glaring lack of real-world interaction, millennials created Uber and thousands of similar businesses based on the shared economy model that relies on strangers to trust one another for economic prosperity. How did that happen? Well, they’ve developed a digital marketplace where the buyer and seller are rated based on performance. While they may not trust the prior generations or any other form of authority, millennials trust the crowd’s collective opinion.

Millennials are often described as narcissists, entitled, or coddled. At the workplace, they’re called out for poor work habits and unrealistic expectations. Overall, millennials suffer a negative public image, and they’re aware of the stereotype. Complaining about millennials and Gen Z is a privilege for the older generations, and they often resort to flaunting this habit in public. But there’s more to their generation than meets the eye. And given how swiftly the world is evolving, most young adults easily adapt to change.

Dream of a Promising Future

Millennials are realistic in their views. For instance, nearly 16% of young Americans believe that the United States stands above every other nation. This is less than half of what Gen X believed. Moreover, 65% of millennials agree that the US is one of the greatest nations. The age gap is also apparent when Americans are quizzed about their future. While generation x and baby boomers believe the best days are behind them, the next generation has a more optimistic view about the future.

20 Reasons Why It’s Great to be a Millennial Today

Despite the negative press, millennials are among the most resilient generations. From better tech, travel, and TV to appreciating their boundaries, caring about the environment, and promoting global peace, the youngsters today are slowly figuring out life at their own pace.

The Face of the Future

Millennials and Gen Z are breaking the age-old stereotypes to create new cultural scenes that promise to make the world a much more interesting place to live. From thinning the boundaries between gender stereotypes and accepting cultural differences, the chances are endless.

Unlike the baby boomers, millennials acknowledge the importance of addressing mental health issues. They’re an anxious and stressed-out bunch and believe in opening up discussions around mental health to make it less of a taboo.

Thinking Outside the Box

Millennials are a lazy bunch, and that’s a boon in disguise. They’re so lazy to drive that they invented Uber! On the flip side, if there isn’t an app that makes life easier, you can bet your money that a millennial is already working on it.

According to a survey, a higher number of millennials abstain from alcohol and cigarette as a habit. This is perhaps the only benefit of being broke since our generation does not have the spare cash to sustain addiction.

Millennials have changed the definition of being a celebrity. With social media being the most powerful tool of the modern age, today, people decide who gets to become famous. For instance, production houses, film studios, and record companies aren’t in charge today, and any aspiring celebrity can leverage YouTube, Instagram, or Tik Tok to gel with the masses.

While Generation X lived to work or worked to live depending on whether they had a family to raise or millions to make, millennials are just supporting themselves. So, the younger generation today can bring a difference to the world if they choose to. After all, the younger population has time on their hands.

Unlike the baby boomers, millennials don’t depend on traditional news networks to stay updated with worldwide events. From social and cultural events to sports and fashion, the hottest news is always trending on social media.

While our parents had to exchange cassettes and tapes for listening to music from around the world, technology has bridged the gap for the next generation. Millennials have platforms like Soundcloud and Spotify that gives them access to the best international music.

Millennials don’t seem to get enough of social media, and for a good reason too. And the growing number of influencers proves the point. If you’ve got talent, put it out for the world to see, and if people like what you’ve got to offer, you’ll know.

Millennials prefer new experiences over materialistic possessions. Adults today barely have the spare change to buy stuff or a place to store them. Therefore, people support a sharing economy. The less we have, the less we throw away, which is good for the environment too.

While it might seem that Millennials open up their hearts to strangers over the internet, youngsters today are more reserved than their parents. We’re the last generation that remembers what it’s like to live in the pre-internet era and the importance of keeping our lives private.

Travel is Easy, Accessible, and Cheap

International travelling today is easier than ever. Millennials can travel to any country that their parents could only dream of. The world has shrunk considerably in the last couple of decades, and travelling halfway across the world for a vacation is a reality.

What club culture was for the baby boomers, OTT platforms are for Millennials. Adults today prefer staying home mainly because it’s cheaper than heading out. Plus, OTT content today is too good to miss compared to standard telly.

Millennials enjoy staying young for longer. While their parents were married, had kids, and were “settled” by 28, 30-year olds today might be an intern, have an enviable Lego collection, or have ice cream for breakfast.

Fashion trends have immensely evolved over the past couple of years thanks to widespread internet access that allows us to browse the latest fashion trends from around the world without stepping outside the house. Mix that with fusion, and you have the perfect recipe for controversy.

Millennials are educated and informed about their privileges, which leaves no room for ignorance. That’s one key reason the modern generation believes in cultural tolerance and is scared of openly discussing racism, sexism, transphobia, or homophobia.

“Be the change you want to see” is apt for millennials. While activism isn’t a novelty, the young generation has the right tools to collectively voice their opinion where it matters. And there are countless examples of social media campaigns ushering change.

Being Friends with Older Generations

Millennials are closer to their parents compared to previous generations. While everything from technology to fashion and culture has progressed significantly since the age of the baby boomers, millennials tend to coexist peacefully with Gen X., And it’s this mutual love and respect that maintains balance in society.

Balance Between Money and Relationships

While Millennials are just as greedy as the previous generations, not being financially stable means that youngsters understand the value of money. While we don’t chase wealth simply for the sake of being rich, millennials want to earn enough to pay the rent on time and put food on the table.

Digital audio streaming services brought millennials closer to classical music. For instance, it’s easier to listen to The Beetles today from any part of the world than it was three decades ago. Technology has bridged the generation gap, and things are only going to get better.

Every new generation brings forth a unique set of challenges, and clearly, Millennials are no different. But, instead of blaming the young generation, adults should take a part of the responsibility since they’re the ones raising millennials. It’s perhaps time to recall an ancient proverb – societies flourish when old men plant trees whose shade they’ll never sit under. Too deep?

In the multi-ethnic, multicultural, polarised world that we live in, Millennials have the right to remind the prior generations about their responsibilities towards shaping the future of our society. Going forward, it’s clear that every generation has something to learn from the other. The young generation needs guidance on how to run the world’s economic, political, civic, and religious institutions.