The Effect of Bitcoin on Digital Marketing 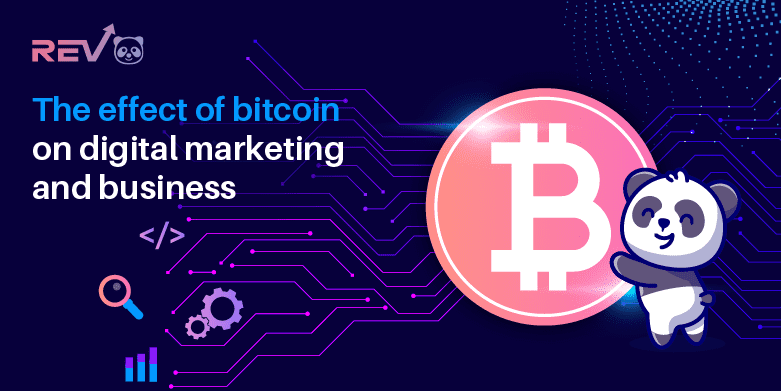 Over the last few decades, the technology has enabled scores of digital marketers to gather and use precise consumer information for targeted advertising. Since information is the new digital currency, advertisers value big data. In digital marketing, it is used through cookies, which stores behavioural patterns. However, consumers today are aware of how personal information is collected, processed, and used. Hence, privacy is a primary concern among the younger audience.

With everything happening around us, including the technological advancements in the global socio-economic scene, alternate currencies are swiftly getting popular. And cryptocurrencies are the latest addition! Bitcoin started the revolution back in 2009 its impact has spread far and wide.

Multiple industries like finance, investment, and healthcare are using cryptocurrency as we speak. And the impact of cryptocurrency on digital marketing and eCommerce cannot be ignored. Blockchain transactions eliminate the middleman, hence bringing down related costs. This applies to international deals, too, since blockchain doesn’t recognise geopolitical borders.

How Do Cryptocurrencies Impact Digital Marketing?

To understand the effect of Bitcoin on digital marketing, we must first analyse where the industry stands. Let’s take YouTube, for example. There are four primary parties involved:

The way it works is simple. The advertisers pay a commission to the channel for gaining access to the audience. But the publisher isn’t the only party earning revenue, as YouTube charges a significant sum for the ad space. Therefore, YouTube is the one making the most money.

Now, if blockchain were to be integrated, the revenue sharing model would be more uniform between the platform and the publisher. This is where a decentralised platform gives back control to the consumer, which in this case is the channel. Similarly, here are a few other examples of blockchain being used in the different spheres of digital marketing.

Who will be affected by Bitcoin’s popularity the most?

If blockchain were to be introduced in digital marketing, the advertisers wouldn’t have direct access to customer data. Instead, they would have to pay the price for the user’s consent. They would also need to fine-tune the customer’s user experience to ensure it’s in line with what they signed up for. While elite marketers today are voluntarily following protocols for fair practice, blockchain would reign in the rogue players more efficiently.

From the user’s perspective, display ads can sometimes breach privacy or feel bothersome. By using blockchain, customers could be spared the ordeal. Ethereum uses something called a Basic Attention Token (BAT), which is a blockchain-based digital advertisement coin. The ad exchange connects advertisers, publishers, and consumers in a non-invasive manner. It’s an excellent way to monetise user interests and boosts resource utilisation. Since the users are paid to be attentive, the advertisers get a better ROI while the publishers earn a fair share of the revenue.

Advertisers can use BATs to purchase ad spaces, which can be landing pages or push notifications. Next, users can choose whether they want to view certain content. If they’re interested, they’ll receive BATs for their time. However, preferences will stay anonymous, and the users will be in control of the ads they view.

The most important part of the puzzle, the publishers, will earn a higher percentage of the revenue since they’ll be paid by the advertiser and the consumer for the content. With the help of blockchain, publishers can charge a premium for the content from the audience. And the interested parties can sign up using BAT.

If this sounds like an efficient process than what we currently use, it’s because it is. Why aren’t we using it, you ask? Well, since the platform stands to lose the most, none of the big companies is interested in getting involved. While blockchain is the future of digital marketing, mass implementation is still a while away, as you might have already guessed.

The Effects of Bitcoin on Digital Marketing

With everything happening around us, it makes sense to question how cryptocurrencies will affect digital marketing. When you analyse the available information, you realise several decisions affect how ad campaigns are conceived and optimised. Starting with user data, which plays a critical role in the advertising process as it helps marketers design the display ads.

By introducing blockchain and cryptocurrency to the equation, the audience would gain additional power over the process, which could result in decreased visibility. For instance, let’s say a Facebook ad campaign targets demography between a certain age group from a certain location. While the advertisers believe the target audience will most likely be interested in what they have to offer, the people might think otherwise.

Say a campaign reaches 200,000 people. If 2% convert, the advertiser still makes 2,000 sales. The audience size diminishes rapidly if people refuse to view display ads. This is a major concern for marketers and one of the several reasons they aren’t keen on using blockchain technology.

The Benefits of Using Bitcoin in Digital Marketing

Businesses spend a lot of money on digital marketing every year. By using cryptocurrency, brands could save a substantial sum by not having to buy leads. BAT is an efficient way to collect user data. And since cryptocurrency doesn’t store financial data, customers would have to explicitly give their consent to advertisers for the process to work. Thus, returning power to the customer.

In the internet era, data is the new gold. Google, Facebook, Twitter and every brand shares your credentials with marketers and advertisers. While this isn’t a security breach, it’s hampers privacy. By using cryptocurrencies, user data would no longer be readily available. Thus, offering total anonymity.

Cryptocurrency eliminates the need for a payment gateway, which reduces the fees and the time spent to process every transaction. For instance, if you purchase on Amazon, you must pay via credit/debit cards, bank transfers, eWallets, or more. In every case, you must connect to a third-party gateway that facilitates the transaction. Crypto wallets offer similar features without the hassle or the high charges, which makes them ideal for quick purchases.

Scamming people isn’t a big deal today as there is very little that the authorities can do to reign in the rogue players. From fake followers, fake likes, and fake comments to fake reviews, and fake testimonials, creating a fake brand image is easy. With blockchain, it’s easier to get better ROI as small businesses can view whether their investments are reaching the target audience. Therefore, your marketing efforts will bear fruit.

Small businesses often find it difficult to stay ahead of the competition, especially in the presence of established brands. Blockchain overhauls the system by prioritising companies based on quality. Therefore, a smaller brand selling reliable products will be more popular than a bigger brand selling cheaper alternatives.

How Does Social Media Affect Cryptocurrencies?

The relationship between social media and cryptocurrencies is complicated. And if truth be told, the former holds major sway at Bitcoin prices. As cryptocurrency continues to trend on social media, it’s at the centre of public attention. This affects the product’s perceived value and induces price fluctuations.

For instance, when news of a popular crypto exchange called Bitfinex being hacked surfaced on social media, Bitcoin’s value plunged 20% instantly. This has an inverse effect as well. For example, every time Elon Musk has a positive reaction towards the crypto industry, Bitcoin prices surge overnight. Therefore, the biggest difference between cryptocurrencies and the stock market is that the former isn’t regulated by the state.

The Future of Bitcoin in Digital Marketing

As peer-to-peer technology gains prominence, marketers may soon be forced to directly approach the consumer for personal data. Paying users for information might soon be a reality, although it will increase the marketing budget. This business model will directly affect social media platforms like Instagram and Facebook that charge a premium for displaying ads.

If marketers directly pay the consumer for data, there is no need for a middleman. This might soon be a reality as crypto-focused social media platforms like Steem have begun popping up. Steem’s database already has over several thousand users, who get paid for every ad they view. While these platforms might be the solution, for now, things will quickly get out of hand once consumers demand a non-trivial amount for personal data.

However, digital marketing will get expensive since marketers will have to pay for direct access to customer data instead of paying for the ad space. This puts the consumer in control of what they view, which is one of the major advantages of a decentralised economy. When you compare the pros and cons of using Bitcoin in digital marketing, the odds are balanced. This means both marketers and consumers gain some, lose some.

Blockchain technology is the future of businesses as we know it, and that is great news. It won’t just protect user privacy but also streamline the way business is conducted. While we have several projections about how efficiently things could pan out in the future, it’s too early to predict the effect of Bitcoin on digital marketing.

We expect blockchain to aid smaller businesses in competing with the bigger brands by increasing transparency, reducing overheads, and building trust within the community. However, that is still a while away, as mass-scale implementation is easier said than done. If you need similar results for your business right now, the experts at Revpanda are happy to help.